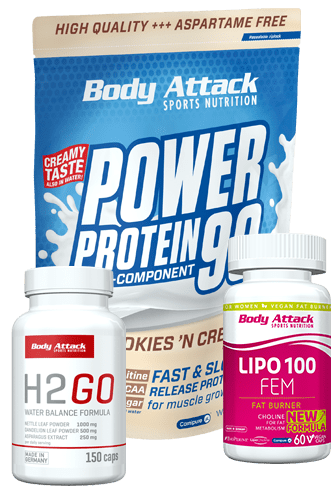 For strength athletes, it is a particular challenge to balance out the strengthening of specific muscle groups. Strength training is really successful only if the proportions are maintained. Particularly important for building muscles are proteins which can be considered as the building blocks for muscle growth. They contribute to the formation of new muscles, preserve the old muscles as well as the bones.

The Body Attack Power Protein 90 contains enough proteins to receive sufficient nutrients even during a demanding strength training. The proteins come mainly from whey, casein (milk protein) and ultra-filtered whey hydro-isolate, and thus have a high biological value. The higher the biological value, the better the body can use the proteins and amino acids for building up the muscles.

The diet bundle, Body Attack LTB-Trio also contains H2Go capsules of Body Attack, two of which should be consumed daily. The capsules should be taken whole with plenty of water. H2 Go of Body Attack is a combination of herbs and roots such as nettle, dandelion leaves and asparagus extract. They can have a positive influence on the maintenance of the normal urea cycle. The urea cycle is a part of the energy metabolism, in which the resulting metabolites are bound and excreted by the kidneys. The H2Go capsules are to be taken with a lot of water (> 2 litres) spread over the day. This contributes to the maintenance of normal physical and mental performance.


For whom is LTB-Trio suitable?

The target group for the Body Attack LTB-Trio is particularly large. Of course, strength athletes and bodybuilders, who want to make their workout more effective and search for a suitable dietary supplement for the weak muscle groups, can especially benefit from this supplement. This applies regardless of whether the athletes are amateur or professional bodybuilders. Use of the supplement by women as part of a workout targeted on the problematic areas also makes sense.