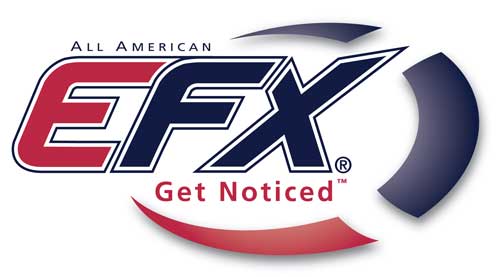 EFX - the innovative brand from the USA. EFX products such as the Kre-Alkalyn EFX convince with new properties. But in addition to the EFX Kre-Alkalyn, there are other excellent EFX products, such as Kre-Celerator EFX or IGF 33 EFX. You can order all EFX products online from us!

EFX - HOW IT ALL STARTED

EFX was founded by successful bodybuilder Jeff Golini. He won Ohios Mr. Lorain in 1982, 4th place in the NPCLA in 1984 and 1988 title as Mr. Natural California Pro-Am. During his active time as a figure bodybuilder, he had a vision in December 1985: to found his own company that produces supplements. After a short time he opened a small shop and made a name for himself due to his good work (own product line).

His talent has always been to create new and unusual products. Because of his skills, Jeff Golini has developed interesting products for many companies. Due to his extensive work as a product developer, his business concept grew and he founded the company All American Pharmaceutical. In October, together with a friend Brian Andrews, he founded another company All American Nutrition, which develops and sells its own supplements internally on an area of ​​100,000 square meters.

Through the new technologies, Jeff Golini and his team developed the strongly basic Kre-Alkalyn in 2003, which was first introduced at the EXPO 2004 in Las Vegas. Since then, the unique creatine has been one of the best and best-selling products in the world.

One day a successful businessman wanted to buy the Kre-Alkalyn patent and market it with the All American EFX label. At first Jeff Golini refused, but then he decided to start a new company. The world"s best creatine product is sold under the All American EFX brand. Athletes and also Olympic athletes from various areas (e.g. bodybuilders, figure athletes, powerlifters, cyclists, canoeists, wrestlers, basketball players) report on the performance-enhancing properties of the unique Kre-Alkalyn.

We at Body Attack cooperate with the successful All American EFX company and offer the original Kre-Alkalyn in our shop. EFX products are currently in demand worldwide. The founder developed a new improved formula for the Kre-Alkalyn. This is the Kre-Alkalyn PPRO EFX with an alkaloid compound that works even more effectively in the body. Jeff Golini has also created a special creatine product for women, the Kre-a-fem, which is precisely tailored to the needs of women. Convince yourself of the original EFX products from the USA.

EFX products in the Body Attack Shop. EFX products are in demand now more than ever before. After the Kre-Alkalyn EFX had already achieved great success and became the best-known Kre-Alkalyn product, the inventor of the original Kre-Alkalyns has now launched further products such as the improved Kre-Alkalyn Pro.

EFX Kre-Alkalyn has won the popular "Planet Muscles Best of the Best" award several times in a row as the best creatine product from Planet Muscle magazine.

Another proof that the EFX Kre-Alkalyn is effective, innovative and effective.

The EFX products have one thing in common: they set themselves apart from the competition through new technologies and particularly good quality. It is not for nothing that the Kre-Alkalyn EFX won the "Best of the Best Award" for the second time in a row.